Mmm, coffee. One of the world’s most beloved drinks.

In fact, over 400 billion cups of coffee are consumed every day. That’s insane!

Aside from it’s deliciously addicting flavor and magical energizing properties, there are actually tons of health benefits of coffee.

As if you needed more reason to love coffee, here are 10 proven health benefits of coffee to help seal the deal.

Our bodies can’t produce essential nutrients on its own which is why we must supplement them through our diet.

Even though coffee beans are roasted, they don’t lose all of their nutritional value, which makes coffee a great source of essential nutrients.

While these daily values (DV) seem low, when you factor in how many cups of coffee you drink a day, it adds up.

2. Coffee is Full of Antioxidants That Fight Free Radicals

In case you didn’t know, antioxidants are molecules that prevent oxidative stress caused by free radicals.


Free radicals are uncharged molecules that are missing an electron and end up causing damage while trying to find another molecule to bond to. This creates oxidative stress which ends up damaging cells, leading to premature aging and a number of diseases.

In order to combat these free radicals, you need to make sure you’re getting enough antioxidants in. You can supplement superfoods in your diet, or drink a cup of coffee.

Coffee contains numerous amounts of antioxidants, with the two most potent being chlorogenic acid and caffeic acid.

In fact, coffee beans are the richest source of these antioxidants, making your cup of coffee great at fighting off stress and inflammation caused by free radicals.

3. Coffee Can Improve Energy Levels and Make You Smarter

What’s better than having energy to conquer the day?! Having energy AND being smarter, all while sipping on some tasty coffee.

Coffee contains the stimulant caffeine which when consumed, blocks the receptor that normally contains adenosine. Adenosine’s job is to slow down the firing of neurons in your brain, allowing you to think calmly and clearly.

However, blocking the adenosine increases the amount of other neurotransmitters like dopamine and norepinephrine, thus increasing the firing of neurons in your brain.

4. The Caffeine in Coffee Can Help You Burn Fat

Caffeine is one of very few natural substances that can aid in weight loss, so it’s no wonder so many weight loss supplements contain it. 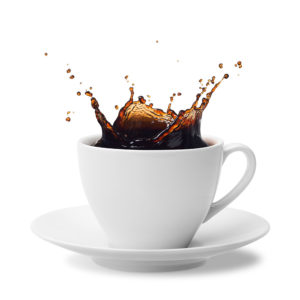 However, the healthiest (and cheapest) way to lose weight is through proper diet and exercise without the use of diet pills, so drinking a cup of coffee can naturally help you shed some weight. But how?

Studies show that caffeine has the power to boost your metabolic rate by 3-11%, which means you can burn between 3-11% more calories than normal. By burning more calories than usual, paired with eating in a caloric deficit and exercising, you’ll be able to lose weight very quickly.

In addition, caffeine from coffee has been shown to increase fat oxidation, aka the burning of fat, by up to 10% in obese individuals and up to 29% in normal weight people.

Unfortunately, over time most people become tolerant to caffeine, meaning you won’t always experience the weight loss benefits associated with it. However, there are still plenty of health benefits of coffee to make you keep drinking it.

Coffee makes for a great pre-workout supplement because it increases physical performance, allowing you to work harder and see results.

When you consume caffeine, it takes between 30 to 45 minutes to be absorbed by your small intestine and stomach.

Once metabolized, it breaks down and triggers fat oxidation while also opening up your lungs, making breathing easier.

Fat oxidation, also known as the break down of body fat, releases free fatty acids into your bloodstream, where they are then used as a fuel source. This is important, because fat is a more steady and reliable fuel source than glucose.

With a more constant supply of energy, you’re able to perform better.

Drinking coffee also causes a spike in adrenaline, which has been shown to increase your performance by 11-12%.

Caffeine has the ability to raise blood pressure, although not by a lot (3-4mm/HG), and it usually returns to normal if you drink coffee regularly.

While increased blood pressure may be persistent in some people, studies have shown that drinking coffee doesn’t actually increase your risk of heart disease.

Instead, it has been shown to actually reduce the risk of heart disease in some women.

Other studies have shown that coffee drinkers experience a 20% lower risk of stroke.

7. Coffee Lowers the Risk of Cancer and Certain Diseases

Drinking coffee has been shown to reduce the risk of cancer, particularly in liver and colorectal cancers.

Believe it or not, liver cancer is the third leading cause of cancer death in the world, with colorectal cancer being fourth.

One study found that coffee drinkers are up to 40% less likely to develop liver cancer.

Another study found that people who consume 4-5 cups of coffee a day have a 15% less chance of developing colorectal cancer.

8. Coffee Can Fight Depression and Make You Happier

Yet another great health benefit of coffee is its ability to combat depression and improve your mood as a result. 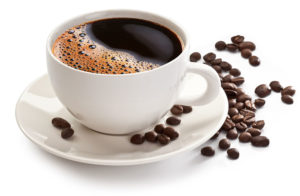 According to the World Health Organization, approximately 350 million people suffer from depression worldwide, with about 17.5 million of suffers being Americans.

One study found that caffeine, particularly from coffee, has the ability to help prevent depression.

Another study from Harvard found that women who drink 4 or more cups of coffee a day were 20% less likely to become depressed.

Coffee has also been shown to reduce the risk of suicide.

If you suffer from depression, coffee may help you a little, but you should definitely seek professional help.

9. Coffee May Lower Your Risk of Type II Diabetes

A study from the Harvard School of Public Health found that over a 4 year period, the people who increased their coffee intake by more than 1 cup a day had an 11% lower risk of developing type II diabetes than those who didn’t change their coffee intake.

More importantly, the study showed a 17% increased chance of developing type II diabetes by people who decreased their coffee consumption by more than 1 cup a day.

Other studies show that heavy coffee drinkers are 23 to 67 percent less likely to develop this disease.

10. Coffee May Help You Live Longer

Several studies have been conducted showing the link between coffee and life expectancy.

In two large studies in particular, drinking coffee was associated with a 26% lower risk of death in women while men had a 20% lower risk.

And that’s why all of these health benefits of coffee are just more reason to drink this delicious pick-me-up! 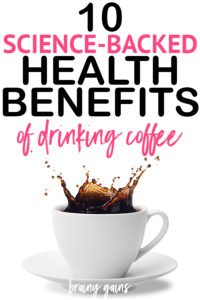 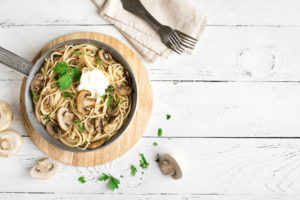 Whether you’re a full-time vegetarian or just participate in Meatless[...] 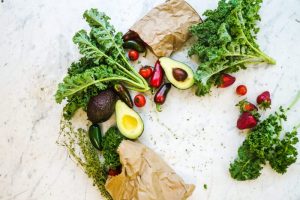 When you think about keto meals, you might immediately think[...] 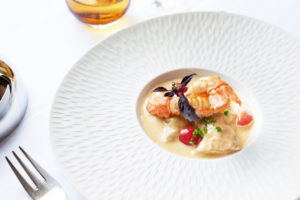 Nothing is better than a home-cooked meal. Scratch that. Nothing[...]